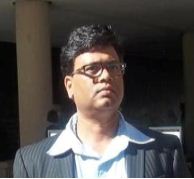 Dr. Fahim Ahmad is a Virologist and obtained a distinction honours degree in Biotechnology; a first class Master degree in Biotechnology. Dr. Ahmad completed a Ph.D. in Molecular Genetics from University of Bundelkhand, Jhansi, India. He completed his first postdoctoral training at the Department of Microbiology and Immunology at the Indiana University School of Medicine in Indianapolis. Where his research focused on understanding how interaction of HIV-1 (AIDS virus) envelope glycoproteins with host cell receptors lead to membrane fusion and viral entry.

He completed his second postdoctoral training from Texas Tech University, El Paso Texas where his research focused on the mechanisms of genetic resistance to HIV-1 infection. Later he joined University of Texas at El Paso Texas as Scientist and lecture. Where he thought cellular Immunology to Master student and subsequently, carried his research on T cell-mediated immune control of persistent HIV infection, for the purpose of vaccine design.

Dr. Ahmad joined SOUTHERN RESEARCH, a well-known Pharma's Company of United States. Here the overall goal of my project is to identify new therapies that target influenza virus replication. A primary concern with the current drugs (amantadines and neuraminidase inhibitors) used to treat influenza is the development of resistance mutations that negate therapeutic benefit. We hypothesize that compounds that specifically target the polymerase complex might reduce the frequency of escape mutations, or promote escape mutants that are unfit for replication. In addition, He is the member of Board of Director Integrated Biotechnological Research Institute; and is a member of several editorials boards and reviewer for scientific journals. He has also delivered papers to several international conferences.

Dr. Fahim Ahmad research interests are focused on understanding how interaction of HIV-1 (AIDS virus) envelope glycoproteins with host cell receptors leads to membrane fusion and viral entry. Analyzing the mechanisms of retroviral entry is a key step in the development of anti-viral agents. Specifically, Dr. Ahmad’s research focuses on the mechanisms of genetic resistance to HIV-1 infection. HIV-1 requires CD4 and a coreceptor (CCR5 or CXCR4) for entry into susceptible host cells. CCR5 and CXR4 belong to the family of seven transmembrane spanner proteins. A naturally occurring frame-shift mutation caused by a 32 base-pair deletion (Δ32) in the human CCR5 gene is highly associated with protection against HIV-1.